Jim Lynch, Vice President & General Manager
To state that the construction industry has historically coped with subpar labour productivity would be an understatement. It’s hard to argue with the numbers. Over the last 50 years, while other industries have witnessed an average 152 percent increase in performance (per Dr Paul Teicholz, Stanford University), labour productivity in construction has seemingly declined. Cognizant of the issues, the AEC industry became an early adopter of project management software; however, the technology was purpose-built for office use, and not suited to pass accurate information to the site. When Tracy Young, co- founder of PlanGrid, realised that the available technologies weren’t benefitting on-site workers—the lifeblood of construction—it was a reality check. During her years as a construction engineer, Tracy spent countless hours every week on non-optimal activities such as hunting down project data, i.e., revised drawings and material cut sheets, managing conflict between various stakeholders in the construction cycle, and ironing out issues emanating from distribution of inaccurate data. Despite being hampered by time-consuming processes, a large part of the construction business refused to adopt paperless technology, only furthering Tracy’s trepidations about the industry.

After watching her on-site colleagues being bogged down by paperwork and broken communication systems, Tracy took matters into her own hands. In 2011, Tracy, along with Ralph Gootee, Ryan Sutton-Gee, Antoine Hersen, and Kenny Stone co-founded PlanGrid—a mobile-first construction productivity software—to usher in greater collaboration between contractors, subcontractors, architects, and developers. At the time of launch, the “mobile-first” aspect of the software tapped into the growing awareness that tablets and smartphones could extend beyond personal use and be leveraged as a business tool. “Construction workers had access to an affordable, long-lasting, powerful device connected to the internet. We felt these devices, leveraged with our software, would enable any member of a construction team to manage and update drawings, specifications, photos, RFIs, field reports, snaglists, and other information at the ease of their fingertips,” explains Stuart Frederich-Smith, head of global product marketing, Autodesk Construction Solutions (ACS).

Besides “connecting the office, site cabin, and field” in the construction cycle, PlanGrid was equally determined to counter the industry’s misconception about high costs associated with technology. To counter this, PlanGrid offered a free 21-day trial, easily accessible via the website, which encouraged construction firms to download and test the solution. The initial “try before you buy” approach paired with a platform that is easy to use by field workers has helped establish PlanGrid as “the single source of truth for all construction data with clients.” In late 2018, PlanGrid’s success was validated when the company was acquired by Autodesk, a global leader in 3D design, engineering, and entertainment software, for $875Mn.

Today, PlanGrid—used in more than 1.5 million construction projects across 110 countries—is an integral part of the Autodesk Construction Solutions (ACS) portfolio.

To explicate on the benefits of PlanGrid’s construction productivity software is a success story involving Interserve, a globally-renowned construction company. PlanGrid played a critical role in helping Interserve build a large luxury complex in Birmingham. The Lansdowne—an 18-storey building with 206 apartments—was completed in March 2019, six weeks ahead of schedule. Peter Lockart, the site manager, credits PlanGrid for instilling efficient processes that expedited the completion of the project. “On a multi-storey project like this, you can be on the 18th floor and suddenly be asked a question by a subcontractor.
Being able to access and share that information wherever you are, rather than having to walk down a huge staircase or go back to the office, is worth its weight in gold over the course of construction,” he says, while recalling the project.

In fact, Lockart and a number of subcontractors are so impressed with PlanGrid that they have adopted the software across other projects. To Lockart, PlanGrid has turned into a necessity, “If PlanGrid were taken away from me tomorrow, I would be gutted.”

Another organisation that benefitted immensely from PlanGrid is SAM Drylining, a specialist contractor located in Rhonda Valley, Wales. Specialising in ceilings and partitions, the company has executed a number of refurbishment projects for schools, hospitals, and offices. Back in 2013, SAM Drylining was still reliant on paper for its on-site documentation, and thereby suffered from poor communication between its head office and multiple job sites. “We were constantly running into difficulties where issues on sites were reported too late or not at all. It would take days, weeks, or even months to pass necessary information between individual sites and the head office, creating a real divide between project teams and the head office,” recalls Kyle Spiller, director, SAM Drylining.

These communication breakdowns had serious financial implications on its business. Since quantity surveyors were unable to inform clients of changes to agreed-upon timelines, SAM Drylining frequently lost its entitlement to be paid for work at the end of projects. In June 2018, SAM Drylining recognised PlanGrid as the digital solution to eradicate its siloed processes. “Previously, our project managers complained that they were constantly bombarded with paperwork. Now, they can instantly share information, regardless of their whereabouts. We have seen a significant improvement in our job site efficiency,” adds Spiller.

PlanGrid’s ease-of-use has contributed significantly to SAM Drylining’s rapid adoption of the technology. Besides an intuitive design, the solution offers users accessibility from literally any device under the sun. As a result, even digitally-challenged construction workers at SAM Drylining were able to adopt the platform. To summarise, PlanGrid has established a culture of transparency, facilitating a “change in mindset” throughout SAM Drylining. While teams are encouraged to be open and upfront about the status of projects, management can instantly track the progress of the same. Spiller says, “The transparency that PlanGrid has brought to the business is absolutely priceless.”

The success stories listed above wouldn’t be possible without PlanGrid’s relentless pursuit to simplify life for every stakeholder in the construction cycle.

Last year, PlanGrid interviewed nearly 600 construction leaders to understand how construction teams spend their time on sites, communicate during projects, and leverage their technology investments. The responses shed further light on the pain points plaguing the industry. The survey indicated that time spent on unproductive activities—such as fixing mistakes and seeking accurate project data—accounted for $177.5Bn in labour costs per year in the U.S. alone. The study also revealed that rework caused by miscommunication among labour teams cost the U.S. construction industry more than $31Bn in 2018 alone.


These findings support the need for construction companies to adopt technology such as PlanGrid, which has a track record of saving users an average of 7.12 hours every week, translating to approximately £14,000 in savings on labour costs per user annually. “The vast majority of PlanGrid customers report savings of 84 percent on rework, which typically accounts for 2.4 to 3.1 percent of project budgets,” informs Frederich-Smith.

Prior to PlanGrid, construction teams suffered from a lack of timely information, which led to slow communication and impacted decision-making. Moreover, difficulties in collecting and sharing data led to a lack of accountability or conflict among various stakeholders. PlanGrid resolves these challenges not just by providing users access to project data, but through a user-friendly UX (on any modern smart mobile device). Frederich-Smith explains, “PlanGrid offers fast rendering, automated sheet publishing, GPS-enabled photos, and hyperlinking; nobody has to wait for hours to access the latest documents and plans. This is critical at the project level where speedy, but accurate, decisions need to be made. As a result, workflows are streamlined, efficiency is improved, and field teams can undertake additional work to boost productivity.” Also, when construction teams leverage PlanGrid to track issues, capture photos, and file reports, the data is gathered in a single place, eliminating issues that could originate from version control.

Aside from the effective collaboration between construction teams during projects, PlanGrid is also beneficial during project handover stages. Typically, as much as 30 percent of data is lost when a project is handed over to the owner, a norm that has severe cost implications for the management of the site. To counter this, PlanGrid collects comprehensive data at the end of a project, enabling firms to deliver a complete turnover package. As a result, construction firms can be more reliable and valuable partners to owners. “PlanGrid collects data that acts as a digital trail during the building process and then turns the data over to the owner for operations and maintenance after construction is complete,” adds Frederich-Smith.

PlanGrid accumulates a repository of construction data that isn’t restricted to just project handover data. The data management and ownership services are applied across the building lifecycle as PlanGrid captures, manages, and retains critical information at every juncture. With non-proprietary data that easily integrates into other platforms, firms can share and manage data with the utmost ease. PlanGrid Connect—an out-of-box, no-code platform—leverages its API capabilities to enable teams to easily and quickly customise integrations between PlanGrid and hundreds of other technology solutions without IT resources. The integrations automatically sync critical information between applications, preventing time-consuming and error-prone double entry. This ensures that everyone on a project is working from the same set of plans and data. And critically, firms can use analytics tools to evaluate their performance across projects and obtain actionable insights to improve their business’ productivity and profitability.

Contractors, subcontractors, and architects across the world are sold on PlanGrid’s proven benefits. In the coming years, PlanGrid is focused on harnessing the latest technologies and constantly improving its software, which can be downloaded as a free 21-day trial from the App Store or Google Play.

PlanGrid’s urge to innovate has been supported by its recent platform enhancements, such as enabling construction teams to access 2D and 3D BIM data on-site and thereby streamlining RFI workflows. “In the future, we’ll be delivering further enhancements to PlanGrid’s on-site functions, data analysis, and critical integration with software for the whole building lifecycle,” informs Frederich-Smith.

Since its acquisition, PlanGrid has also benefited from Autodesk’s global network of subject matter experts in construction. As a result, PlanGrid has accelerated efforts to increase its presence in both the APAC and EMEA regions. Frederich-Smith concludes, “By rapidly growing within the Autodesk family of solutions, we are benefitting from a tremendous amount of positive internal alignments. We’re ready to further shape the new age of construction.”
- Michael Rosario
November 18, 2019

Description
Offers a construction productivity software that connects the office, site cabin, and field in the construction cycle in real-time on any device, including desktop, smartphone, or tablet. One of the top construction tech solution providers in Europe, PlanGrid is used in more than 1.5 million construction projects across 110 countries. An integral part of the Autodesk Construction Solutions (ACS) portfolio, PlanGrid has the proven track record of saving contractors and subcontractors an average of 7.12 hours every week, translating to approximately £14,000 in savings on labour costs per user annually 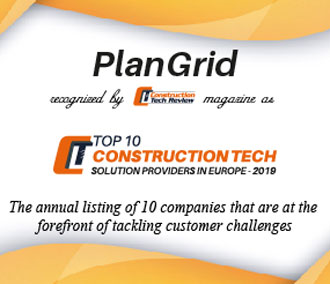 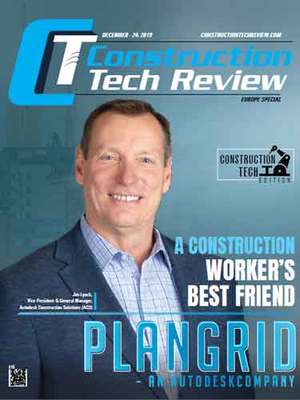